The Comic Electric: A Digital Comics Symposium took place on October 14th 2015 at the University of Hertfordshire in Hatfield. Being the first ever scholarly conference on digital comics, The Comic Electric inaugurated the beginnings of a thrilling new area of study. The day kicked off with a Keynote speech from the organisers of the event, and was followed by 4 rich panel sessions, with contributors coming from various disciplines and parts of the world.

The symposium was organised in order to start a serious discussion among scholars, but also in order to celebrate the successful realisation of the Electricomics project. Led by the groundbreaking and widely renowned comic book author, Alan Moore, the Electricomics team (consisting of Leah Moore, Daniel Goodbrey and Alison G

azz
ard to name a few) delivered a practical and beautiful-looking digital toolset in order to jumpstart and aid in the production and consumption of digital comics. Their main research questions concentrate on exploring how digital comics change and advance the medium of comics itself, as well as investigating more practically what is needed by creators to create digital comics. The most important deliverables they had set for themselves, are, reportedly, (1) providing the users with a free reader app, (2) 4 readily available sample comics, (3) free/open digital comic creator tool, and (4) op
en available code. The project may have taken a bit more time than anticipated (as it commonly happens)– however, the team kept its promise and on September 2nd released the first version of the app, as well as the open source code. Shortly thereafter, the official Electricomics website was updated with the first version of the digital comic Generator, which enables one to create comics to read and share through the main app. In order to encourage their audience to use the app and produce more content for it, the Electricomics team has also issued the first “Electricomics Challenge“, consisting of a small list of semi-specific instructions towards for creating a halloween-themed digital comic.

The opening speech by Daniel Goodbrey, Leah Moore and the rest of the Electricomics team aimed to give a fairly succinct summary of all the (historical) events that led to the inception and completion of the Electricomics app, either directly or indirectly. The authors initially gave a brief but quite informative overview of the history of digital comics. As recent as their history seems to be, they seem to have a rich history of interacting with other media and always appearing in hybrid forms. Their origins are of course intrinsically related to the beginnings of the computing technology and the experimental storytelling. The first actual digital comic is considered to be Red Hawk (1986), which is an early computer game, first released on the ZX Spectrum computer. Experimentations continued with other forms of text-adventure-style narratives with comics elements. With the dawn of the 1990s and the evolution of computer technologies, comics started to appear on CD-ROMs and even email lists, ultimately arriving onto the still young World Wide Web in 1993, with David Farley’s Doctor Fun. The webcomics format skyrocketed almost immediately, as it received a wider audience and a free and inexpensive way of dissemination. They initially adopted the format of their print counterparts, but soon thereafter ventured into new waters, blending together with other expressive forms on the newly established digital medium. 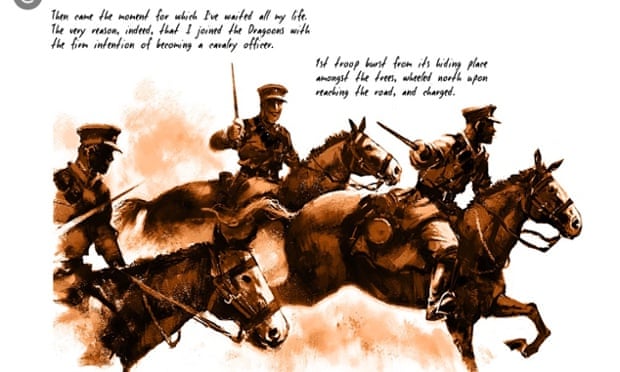 What webcomics offered seemed revolutionary at the time. The Internet had removed a major obstacle, which has always been blocking the path in creating print comics: the publishers, or “gatekeepers”, as Goodbrey calls them, have been removed from the line of production, allowing those comics stories to skip the filtering and the strict standards of print and see the light of day much more easily. Of course, this meant that there was less quality control and more disorder in the digital comics world. Regardless, the benefits of such a system allowed comics to bypass (to some degree) being compared with the older, highly-esteemed brothers Literature and Film, which have been overshadowing them since first comics appeared. The arrival of tablets boosted the market of print comics, but they also allowed for even more experimentations with the physical and digital potentialities of modern technology. Tablets’ dimensions were already close to those of print comics, which facilitated their adoption and settlement on the handheld screen. However, the distribution of comics in tablet-optimised formats more often than not implied the return of the “gatekeepers”,  not to mention the advanced technological skills necessary for developing a functioning digital comic file.

Having all this in mind, the Electricomics creators decided to proceed with creating a platform for reading, creating and publishing comics on a tablet device. Their intention was precisely to emphasise and embrace the advantages and potentialities of such a technology, despite it having some regressive characteristics. They concentrated on reducing the presence and the effect of the gatekeepers to a minimum, endowing the Electricomics users with more control and power over their own creations. What’s more, the electric comic format would make use of different ways of navigating through the content (touch-based technology, different sensors), as well as take advantage of all the inherent benefits of using a tablet (such as portability, immediacy and its physicality).

The results presented at the Comics Electric symposium were all quite impressive. In the initial release of the Electricomics app are contained 4 different digital comics, created with and for the Electricomics technology: Big Nemo (Alan Moore and Coleen Doran), Cabaret Amygdala (Peter Hogan and Paul Davidson), Red Horse (Garth Ennis and Peter Snejbjerg), and Sway (Leah Moore, John Reppion, and Nicola Scott). What is of note in these digital comics is that they are not simply static digitised copies of print comics, but rather digital natives. They are build with the attempt to make the most out of the possibilities of the medium on which they are hosted. Big Nemo, for instance, frequently experiments with the page and panel layout, panels and other comics modes shift around and sometime even produce low-frame animations; Ennis’ Red Horse is illustrated masterfully with digital watercolours, and although it does not play with animation, it uses the advanced digital painting techniques to represent the scenery from the long-gone World War One. Moore, Reppion and Scott’s Sway uses the interactive possibilities of the the digital technology, as well as z-index positioning and parallex in order to engage with the interactor and play with their depth perception.

Lastly, it is important to point out that Electricomics is a registered Community Interest Company (CIC) which means that all revenue it receives will be given back to the community and the comics industry. This assures that research and development coming in and out of Electricomics will be available to the public, and it will be used in order to make further progress in the field.

Publish or Perish! is out

The PublishingLab is proud to launch, Publish or Perish!, (by Silvio Lorusso and Stef Kors) a research and creation project commissioned by DONE, a thinking and action program by Foto Colectania Foundation that aims to approach the image’s new ecosystem in the digital technology and Internet era. The program is supported by Banc Sabadell Foundation [...]

For our upcoming research program Print/Press we are looking for someone who will  research printing products and techniques in collaboration with printers and will document and showcase them in a digital platform. The ideal candidate is interested in print while also familiar with web design and development. With this research project we aim to set [...]

In what follows, I will try to elaborate on the launch of oneacre.online, an experimental publication and distribution project, that aims to utilise its online space to seed unprintable works. oneacre.online begins with an attempt to probe its ambiguous online terrain and determine how much of a space an acre actually is when transposed to [...]